This morning, I looked out my meditation room window to see a deer in the field. I was shocked that it was on the wrong side of the garden fence. How it got in, I’m not sure, because despite repeated efforts, it simply couldn’t jump back out. 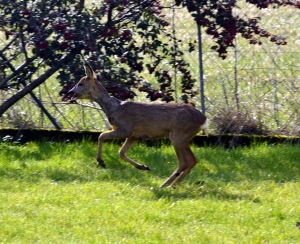 The poor thing kept running from one end to the other, desperately trying to figure out WTF happened to it. How did I get here? Am I trapped? How do I get out? Will I ever get out? Is my life now the size of this rectangle? These are the questions I heard myself asking (je me demandais) as I watched the scene.

I called Stuart to see what was taking place. We saw the creature jump into the mesh fence and spring back startled and frustrated. Stuart grabbed his camera and went downstairs. He reappeared out the window and started closing off the driveway. I’m not sure what he was thinking (he later said he was afraid it might run into the road and get hit), as that was the only way out for the creature. I suggested it would be better to leave it open and get the animal to move in that direction.

So, Stuart had to sort of herd the deer away from the path it had been running, back and forth, as if it would suddenly yield some new doorway, some new relief and freedom. This, of course, spooked the deer even more, and it slammed itself against the fence in desperation to get away. It made me wonder about that fight/flight part of the brain that tells us to run and how often it might be faulty.

As I watched, I had to wonder also about what I was dreaming…this symbol of the heart and unconditional love feeling caged, trapped, and confined. I felt its anxiety, or at best, maybe just projected my own, and began to hum. I wanted it to feel calm, to stop just enough to realize there was another way. The beaten path would get it nowhere.

And a moment later, it had its revelation and headed toward the open gate and down the road, looking back as if to make sure there was no one in pursuit. It bounded across the road and up into the open field across from us.

I feel touched by this medicine in so many ways, the deer being a symbol of gentleness and, ironically, alternate paths to the same goal…

“Deer has entered your life to help you walk the path of love with full consciousness and awareness, to know that love sometimes requires caring and protection, not only in how we love others, but also in how we love ourselves….When a Deer totem enters your world, a new innocence and freshness in about to be awakened. New adventures are just around the corner and there will be an opportunity to express the gentle love that will open new doors for you.”From ShamanicJourney.com

If I could just find that gentleness of spirit within myself and toward myself when I feel anxious and caged, maybe I would discover an open gate through which I too could leap. Maybe the only reason I feel so anxious and lost sometimes is because I keep trying to run the same 50 yards of territory in a vast, mysterious world.

So I pray for greater awareness. I pray to find the grace with which to move through life’s obstacles. I pray to turn my head and walk in a new direction when necessary for my own happiness…one in which my heart is free to be open, one in which I trust my intuition over the fight/flight response, one in which I am less demanding for perfection in myself and others. I pray to remain vigilant to my highest path.

Dielle Ciesco if the author of The Unknown Mother, published by Roundfire.