I can't recall exactly how I came across this story: a homeless man beaten to death by police. What struck me about this incident were a number of details that warranted taking note of. For one, the man was Caucasian, and I had already been conditioned by the news media that African-Americans were the chief victims of police actions involving excessive force. Secondly, the unfortunate individual was not a violent thug nor hardened criminal, but a rather frail person whose only offense was that he was an eyesore. Shirtless, with an unkempt beard, his crime was loitering. And of course, the manner of his death, being pummeled to death, stands notoriously apart from the usual police shootings.

Eventually, I came across a series of YouTube videos that documented this event. There was a video recording taken from a closed-circuit TV camera at the adjacent bus stop showing the beating, a silent witness to a brutal act. What was more appalling to me than the impending assault, was the exchange of two of the officers with the victim, a harrowing display of sadistic provocation.

In addition, videos of street protests decrying such police violence illustrated the collective shock of a small town. The town was Fullerton, California; the man was Kelly Thomas. The year was 2011.

Kelly Thomas and his evolution to homeless and beaten

An internet search yielded more videos, more articles, more stories chronicling the event; the press conference held by the victim's father, the grand jury indictments of the police officers involved and their eventual trial where, astonishingly, they were acquitted. The fact that they were indicted and brought to trial at all was a precedent - up to that time no police officer had ever been prosecuted for excessive force in the history of Orange County, a tradition that likely imparted a sentiment of impunity on the part of the accused officers when they were partaking in their vicious act. 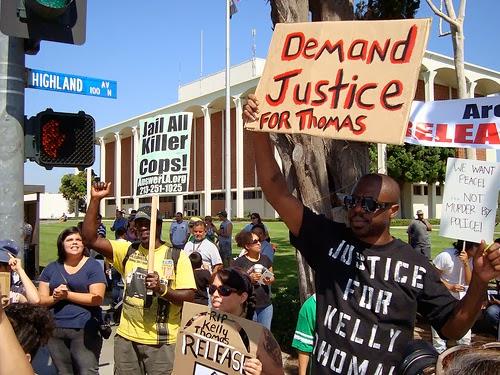 The town of Fullerton erupts

This incident was the seed from which my novel, Justice Gone, sprouted. While the real-life victim had mental health issues, namely schizophrenia, the character in the story was a disturbed war veteran, a different kind of psycho-emotional disability. Both, however, were members of the homeless population. A large percentage of the less could be considered as refugees from the Omnibus Budget Reconciliation Act of 1981, which Reagan signed into law and which ended community mental health programs established by Jimmy Carter. It began a process of eliminating the federal government’s role in mental health. Initially, it cut funding by 30%. By 1985, it had been cut by almost 90%. Prison took the place of these mental health facilities, and any intention of saving money was negated by the costs of a swelling prison population. Adding the fact that this money has been diverted to the business entities that run the prison system, adds further controversy.

In my research on the homeless, I found out some shocking facts: that an average of 3.5 million Americans lives on the streets. Thirty-five percent of the homeless population are families with children, which is the fastest-growing segment of the homeless population. Twenty-three percent are U.S. military veterans and twenty-five percent are children under the age of eighteen years. On the other side of the coin, small towns just can’t afford to take care of these people without some help from the federal government, and neither can they withstand the social and economic impact of their presence.

Making the character a veteran also raises awareness of the consequences of war, and the importation into this country of a specific type of Post-Traumatic Stress Disorder, one that should be addressed by the Veteran's Administration. The VA's efforts to tackle this problem to date seem half-hearted, mainly due to a lack of resources. The obvious question is why should that be? Despite all these serious undercurrents, Justice Gone, as a piece of commercial fiction, is meant to entertain. The novel takes the form as a whodunit that culminates in a courtroom drama and ends with a chilling finale. In the novel's version of events, the police officers, after grand jury proceedings to placate the public, never get indicted. The reluctance to deal with the matter forcibly by the town council illustrates the political and economic dynamics within a small town, the leadership of which prefers to sweep the whole thing under the rug. The tension between the public and its local leaders dominates the first part of the book, until, in an act of vigilante justice, three of the officers involved are assassinated by a sniper.

Now, public pressure is deflected in a new direction: public safety. The cold-hearted and frighteningly professional manner in which the officers have executed means there's a dangerous killer somewhere out there, and the uploading of the bus station video of the police beating to the internet means it could be anyone who might have viewed it. The desperation of the law enforcement authorities to find this individual leads them to suspect the victim's war-time buddy, an African-American vet suffering from PTSD, and whose whereabouts are unknown, having taken off after the killing of his friend. The manhunt that ensues forms the second part of the story.

Deeply entangled in this mix of chaos and melodrama are Tessa Thorpe, a caring and committed psychological counselor who has had both men under her care. Having gone through the trauma of losing her first patient, participating in the public demonstrations and giving evidence to the grand jury, she anxiously tries to avert a second tragedy. She and her colleagues frantically search for Donald Darfield, the missing vet, in the hopes of finding him before the police do. In a dramatic confrontation between Darfield and law enforcement at a remote mountain cabin, she risks her life to make sure Darfield is brought back alive.

What follows is a publicity loaded trial that attracts nation-wide media. Another major character is introduced, the aging blind defense lawyer, Nathaniel Bodine, a figure based on a real-life blind lawyer that appears in John Grisham's true crime book, The Innocent Man.

This third part of the novel is a detailed look at the American justice system, from arraignment and bail bond hearing to the announcement of the verdict. Included is a chapter dedicated to the jury's deliberation, a drama reminiscent of Reginald Rose's 12 Angry Men, and indeed I did I watch the film for inspiration.

Once again, I uncovered some disturbing facts during my research. In New Jersey, as an example, 38 percent of the people incarcerated are those that couldn’t meet their bail bond. The overwhelming majority of them are guilty of municipal violations - unpaid parking tickets, driving with a suspended license, a few sticks of marijuana…none of whom pose a threat. I also learned the strategic role of demographics when picking a jury, how prosecutors will go to all lengths to keep African-Americans off the jury, since they tend to be sympathetic with the downtrodden and the underdogs, i.e. the defendant.

Because this is a commercial mystery whodunit, and not a post-modernist theme on the equivocality of life, the killer must be found and identified, which occurs at the end of the book.

In addition to the social issues surrounding the story, and the nuances of courtroom proceedings with its implications for justice, the behavior of the news media is frequently injected, portraying them for the most part as voyeuristic and manipulative. Everything combined should add up to a broad appeal for those following current events, which was my objective. The first 2 novels I wrote, The Plain of Jars and Journey Towards a Falling Sun, were cross-cultural adventure novels set in Laos and Kenya respectively, but they did not sell well, perhaps because their appeal was somewhat limited to a small market. I wanted to do something of an opposite nature. Whether I succeeded or not will be known shortly after its release date on February 22.

Nick Lombardi Jr. was brought up in Bronx, New York, and has spent over half his life in Africa, Asia, and the Middle East. Nick can speak five languages: Swahili, Thai, Lao, Chinese, and Cambodian. An event in California in 2011, a homeless man beaten to death, inspired Nick to write his newest novel, Justice Gone.He is also the author of The Plain of Jars and Journey Towards a Falling Sun, and now lives in Phnom Penh, Cambodia, currently working on his fourth manuscript, Woman in the Shadow, another Tessa Thorpe psychological thriller